Betting Football Over Under Odds 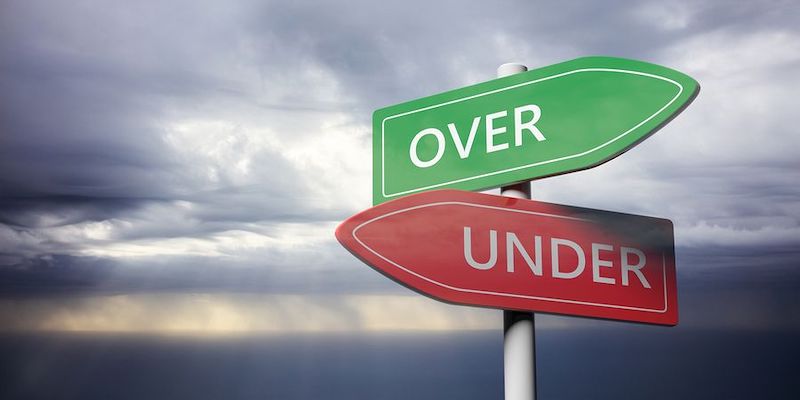 Betting football Over Under totals accounts for approxiametly 30% of action.

– Betting NFL totals begins with an understanding of key numbers.

– Wagering on totals in college football can be profitable if bettors know what to look for.

Betting Football Over Under Totals

Betting football Over Under odds can be very profitable for bettors that know what they are doing. Wagering totals on both college football games and the NFL is pretty popular among bettors, both experienced and recreational.

Regardless of where you lie – experienced or recreational – why not win more than you lose?

Quick refresher and for those with less experience…betting on a game total in football is simply predicting whether the final score will go Over or Under a point total set by oddsmakers. Bettors aren’t trying to guess the exact number. If the total lands on the exact number, the result is called a Push and the bet is refunded.

The outcome of the game does not matter either. The only thing that matters is the combined final score. If a total was set at 50 and the final score was 28-24, anyone that wagered on the Over is a winner.

Any NFL Over Under strategy begins with understanding NFL key numbers. Scoring is more static in NFL games. Touchdowns are six points, field goals are worth three, and NFL teams don’t attempt as many two-point conversions as college teams do.

The frequency of games ending with between 40 and 44 points is 14.24 percent. This can help football total bettors in their handicapping of games.

Factors to Consider When Betting Football Over Under

With an understanding of the numbers, totals bettors can then look at a range of variables that affect scoring. One, of course, is the abilities of the offenses and defenses playing each other. Teams with great defenses tend not to give up a lot of points. That is often reflected in a low total though.

Weather is also a factor. Playing in cold, wet, and rainy conditions usually results in less scoring. Playing an NFL game in a domed stadium will have an impact on the game total as well since teams don’t have to deal with the elements.

Live betting football totals can be extremely profitable as well. But you need to know when to get in and when to stop.

Betting Football Over Under – Wind Speed Plays a Factor

One of the biggest factors that will influence a college football game total is wind. Higher winds are difficult for offenses in today’s pass-happy offensive schemes.

In over 700 college football games over the past several years in which the wind speed was recorded at 13 miles per hour or higher, the Under is 449-332.

Those are some significant numbers and should be considered by college football totals bettors.

When you have two really high-scoring college football teams, the tendency is for bettors to get all giddy about the Over. Less experienced bettors will hammer the Over, but a more practical and analytical approach should be taken here.

Bettors should also look at the numbers. In a 1,500-plus game sample, the numbers tell a different story. When you have two college football teams whose scoring averages add up to greater than the set game total, the Under is actually the more successful play.

In such games over the last several years, the Under is 898-646-28. That’s a winning percentage of 58.2 percent. This is another scenario that football totals bettors should keep in mind.

It works in reverse too. When you have two college football teams whose scoring averages add up to less than a set game total, the Over is the better play.

In over 1,200 college football games with a total of 52 or higher (and two teams whose scoring averages added up to more than 52), the average final score was 64.2.

This is another piece of information college football bettors can use when betting football Over Under lines.