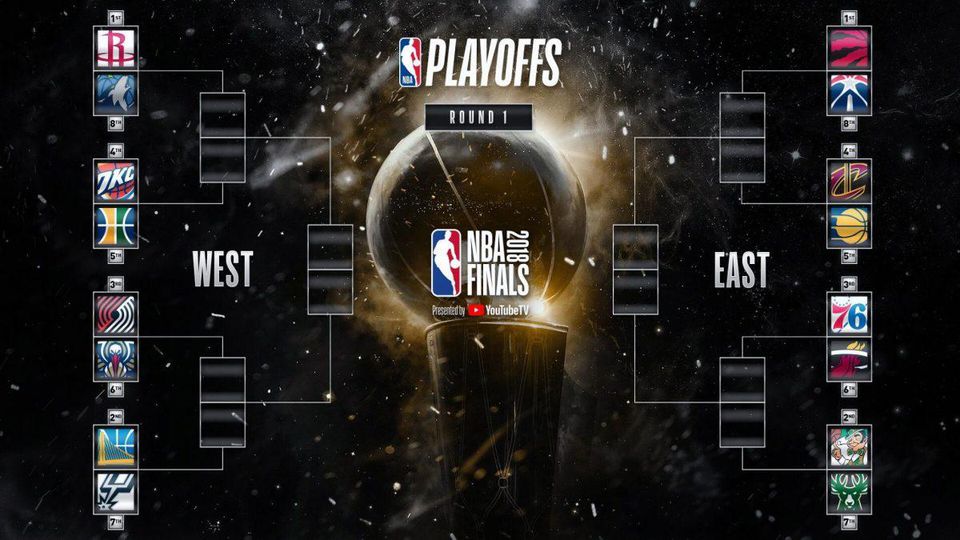 The NBA regular season is finally concluded and with it comes the time to start the NBA&#39;s so-called 2nd season. NBA playoff basketball is a different game from what is often seen in the regular season as defensive intensity increases, every possession matters, and stars power never shines brighter. While the West is generally viewed as the better conference and gets most of the coverage I am going to take a quick look at the East.

Will the East once again be Lebron&#39;s to do as he pleases or will somebody else step up to dethrone the King?

The Raptors won the #1 seed in the East behind two stars in their backcourt, maybe the toughest bench in the league and bruising mentality on the inside. They sort of drew the short straw for a #1 seed as they will have to take on a very talented Washington Wizards squad in the first round and have a brutal gauntlet if they are going to reach the finals.

After being swept in the 2nd round last year many thought the Raptors would blow up their core and rebuild from the ground up. Instead, they elected to keep the team intact and coach Dwane Casey has them playing a completely different brand of basketball. Gone are the iso-heavy sets that defined previous teams. They have been replaced by a team that spreads the ball around and fires the three ball.

The Wizards have stars of their own in John Wall and Bradley Beal and have the overall talent to give Toronto all they can bargain for in a 7 game series. This team is postseason tested from years past. But this group has struggled down the stretch as Wall looks to return to form coming back from knee surgery.

The Wizards win a few games but their inconsistency and the Raptors depth prove too much for Wall and company to overcome. Raptors in 6.

Top Online Sportsbooks for betting on the NBA Playoffs

This one should be a close one as the ragtag Boston Celtics will take on the Milwaukee Bucks. The Celtics will be without superstar Kyrie Irving as he is out for the postseason due to injury. They will attempt to survive relying on Al Horford and several young guys.

The Bucks, on the other hand, will clearly have the best player on the floor in Giannis Antetokounmpo as he will attempt to win his first playoff series. The Bucks drew the team all of the bottom half of the East was rooting for so there are no excuses. Milwaukee struggled down the stretch as their defense was generally awful in allowing 110.3 points per 100 possessions in their final 26. After an initial 9-2 stretch after the firing of Jason Kidd, the Bucks finished a mediocre 12-14.

This is probably going to be the closest series in the first round and maybe all the Eastern playoffs. Which Milwaukee group shows up vs how Boston&#39;s young core handles postseason pressure? I&#39;m going Bucks in 7 games as Antetokounmpo finally has his superstar moment in the postseason. Shame for Celtics fan as it would have been nice to see what they could have done with a healthy team (including star Gordon Hayward, who was lost for the season minutes into the opening night).

Philadelphia is the talk of the NBA right now as they roar into the playoffs winners of 16 straight. While game 1 is a longshot the 76ers are also looking to get back Joel Embiid early in the series. The questions for this team will be how this young group handles the postseason. Most of the players have never played in a postseason and this will be Coach Brett Brown&#39;s playoff debut as well.

When healthy the 76ers sport one of the leagues best starting 5 lineups. Led by Embiid and all-world rookie Ben Simmons they are +268 in 600 minutes playing together as a starting 5(J.J. Redick, Robert Covington, and Dario Saric). That is best raw plus-minus in the NBA by nearly 100 points. Simmons, in particular, is showing Philly fans he was worth the wait after missing all of last season rehabbing from foot surgery(Jones fracture). Can this team cope with the increased pressure and live up to the expectations many are setting for them? With Boston banged up many are predicting the 76ers to at least reach the Eastern Conference Finals.

Miami enters the postseason with a deep and solid roster. What Miami lacks is real superstar-level talent. They will play solid basketball as coach Erik Spoelstra generally has his teams ready. Hassan Whiteside should be an entertaining matchup if he gets to go head up vs Embiid. Miami also has PG Goran Dragic who will need to be in top form if the Heat are to have a chance.

Miami is a well-coached playoff savvy team but the talent gap just looks too wide to overcome. The Heat will keep a few close and maybe steal one at home but the 76ers monsoon will be too much to stop. 76ers in 5.

We get a rematch from last year&#39;s opening round matchup where the Cavs ousted the Pacers. And while the team&#39;s name on the Jersey is the same the dynamic of these two teams has wildly changed.

Once again, the Cavaliers are the favorite to represent the East in the finals. Can Lebron and company once again overcome their regular season drama and rise to the occasion in the postseason. James has once again played at an MVP level while leading his team. And what has seemingly become the norm surrounding James the Cavs season has been filled with chaos as Irving wanted to be traded and most of the roster was overhauled mid-season.

Indiana has put a terrific season locking up the 5 seed when they were expected to fall out of the playoff picture with the departure of Paul George. Victor Oladipo has established himself as a bona fide star and made the Pacers front office look like heroes in the Paul George deal. He will need to raise his game to another level if the Pacers are to have a chance.

Until I see differently I have to believe that once again &quot;Playoff Lebron&quot; will show up and lead the Cavs to victory. It&#39;s a nice story for Pacers and they look decently set up going forward but I can&#39;t put them knocking out Lebron(and all his drama) in round 1. Cavaliers in 5.